We got to Jakarta one day before our departure, very late at night. Since we heard that taxi drivers can rip you off, we decided to take reputable Blue Bird Company. It proved to be a disaster. Our driver could not speak or understand a word of English. He decided that we have to pay not only for the ride, but also for the parking and the toll. He took us to the wrong hotel, although we gave him the exact address and a phone number of hotel (and he suggested, that he makes a call with my phone which has a Slovenian SIM card). When we got to this wrong hotel, he took my 100.000 IRD bill (the price was 85.000 IRD), found some other expenses, that he had, sat in the car and left. So total rip-off.

If you ask hotel staff to arrange you a taxi, they always call Blue Bird Company. Afterwards we had two more rides with Blue Bird Company and we didn’t have any more problems. Maybe the first time was just a bad luck, but it left a bad feeling, so we wouldn’t use them again.

We had a one full day in Jakarta and we didn’t really plan on what to do in advance. We took a long walk around town. We went to Monas Park. Since it was Sunday, the place was full of locals. In the middle of the park there is a Monas National monument.

After that, we went towards Jalan Jaksa, an area known for many backpacker hostels and bars. There was nothing special to see, except that we met two rats, one alive and one dead. The alive one was just entering a building, marked hostel, through a hole beneath the roof. We’ve heard that lots of backpackers choose accommodation in this part of Jakarta, but we wouldn’t recommend it. We didn’t see the hostels from inside, but the outside of the buildings and the streets are dirty, obviously with rat residents.

Here are some things worth mentioning:

When we walked around Jalan Jaksa area, we found a great European restaurant. When we were looking around other guests, our guess was that this is a get togehter for westerners, working in Jakarta. We came there just in time for brunch. They had a live music with four young guys playing their arrangements of well known songs. They were really good! Besides music, a huge variety of drinks (including wines, cocktails, fresh juices and ice cold draught Heineken) made us stay. We ordered a pizza. So although it is a bit expensive and not a typical Indonesian restaurant, we would recommend it for a change.

In Jakarta we took a local bus to the center of town. At the reception of our hotel, they explained us how to get to the station, buy a ticket and which line to take. System is easy so it is not a problem to understand it. We always prefer using local transportation rather than taxis.

Jakarta is full of shopping centers. We went inside two of them. On was more for the locals, with no known brands (except McDonalds 🙂 ), with cheap and nice clothes. We even manage to buy some things. The other had more western vibe. They had a thorough search on the entrance, even metal detectors (like on the airport). It was full of known brands (Mango, Zara…) and of course more expensive ones (like Boss and Guess). Visiting the two really showed the difference.

In just one day in Jakarta, we managed to get a quick glimpse of it. We didn’t really saw any attractions, but we didn’t even plan to. Our initial plan was to skip Jakarta entirely, since we wanted to rationalize our time in Indonesia. Because of the change in our plan, we ended spending a day in the city. If we would do it all over again, we wouldn’t stop, but would rather see some other place. We didn’t like, what we saw. We got a sense of Jakarta as a huge dusty city, with not much to do around.

Hotel that we chose was situated near city center. It’s situated between city center and airport (closer to the city center), which suited us, because we had a flight late at night. Hotel is new and modern style. Rooms are small, but clean. They have a good choice of breakfast, with a variety of local food. They enabled us a service of storing our baggage for the whole day. Price is good, for the service that you get. We paied 25 EUR per night for a room with breakfast. Breakfast isn’t continental, so be prepared for spicy rice with chicken early in the morning.

We would recommend this hotel for Jakarta visit, if you are staying for a day or two. For longer stays, you would probably prefer a hotel with more amenities.

There are only two disadvantages: rooms are not very well isolated, so there is noise coming from the hall and that there are a lot of Amaris hotels in Jakarta (three, I think), so when you tell your driver, which hotel you want to go, be very specific. We went to the wrong one.

Sadly, this was the last day of our Indonesia trip. Trip home was nothing special. After 20 hours in the air we went back in time and arrived 14 hours after we left Jakarta. 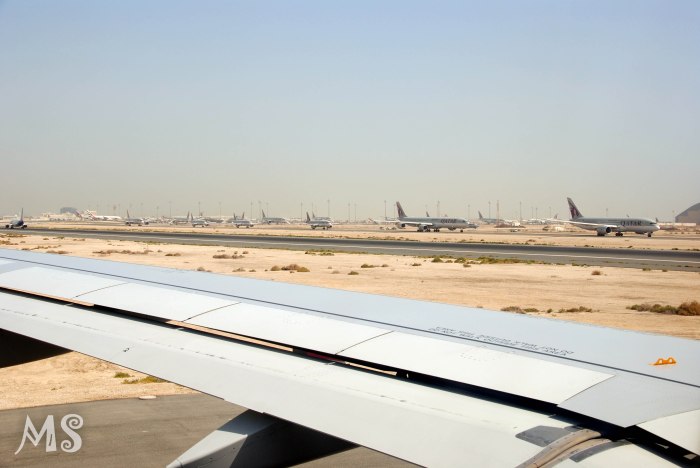 Visiting Indonesia was an amazing experience. 18 days sounds too short (we agree with that), but we’ve managed to make the most out of it. We will surely consider returning someday to see all the great places that we left out. We still want to see Kalimantan and West Papua, as well as Raja Ampat islands, where diving and snorkeling is supposed to be fabulous.

So many places to see, so little time 🙂

4 thoughts on “Our one night stand with Jakarta”