So, we decided to start writing again on this neglected blog. It’s not that we wanted to stop writing in the first place. The problem is that we’re not left with much time after returning from our jobs. And unfortunately the posts don’t write themselves. Even though we don’t have problems writing in English, it’s still not as easy as writing in our own language. And than there’s also time needed for selecting which photos to put on our blog and photo editing. We’ll try to improve in the future since this blog is also a memory for us on our trips and travels.

We’ll write about what we’ve been up to in between, but first we’d like to share with you our latest trip to Greek islands. We’ve been there many times before and we shared our last summer trip here as well. Since we had such a great time last year, when we traveled around four Cycladic islands, we decided to do it again this year. We visited some new islands, though. The ones, you’ve probably never heard about. So lets start with the first one… 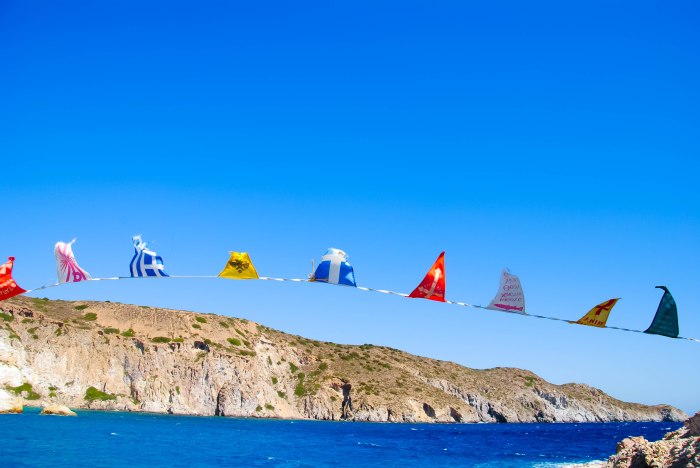 We first learned about Milos only when researching which other islands exist in the Cycladic group of Greek islands. We decided to visit it immediatly when seeing images shown on Google pictures. The clear blue waters, dotted with white rock formations. I mean, how can you resist not going.

Milos is a volcanic island, which gives it distinguished shape and signature rocks. As on Santorini, you can find red and white beaches around the island, which is also consequence of volcanic activity.

We decided to stay in Adamas, which is also island’s main port, where all the ferries dock. Even though we’ve researched it and thought we’ll be staying in vibrant tourist town with little shops, taverns and cafes, it didn’t appeal to us. Maybe it was because the center of the town isn’t closed for traffic and you have to watch your back when the numerous cars and motorbikes zoom by. Maybe because we didn’t like our apartment (which was looking on a big dusty parking lot and the owner seemed weary and bored to death by people staying at his place). Maybe it was the lack of a great beach near town. Or maybe just because we were expecting to much, since we stayed in such great little towns last year when touring the Greek islands.

We rented a motorbike, which is the easiest (and cheapest) way to explore the island on your own. We drove to Plaka, the island’s main town. Our expectations were low, we went there just because we’ve heard that is the best place to see the sunset. But the town surprised us in a good way. It has colorful cobbled streets that are unique to Cycladic islands. There were also the small beautiful shops with handmade souvenirs and a handful of Greek tavernas. We loved it. 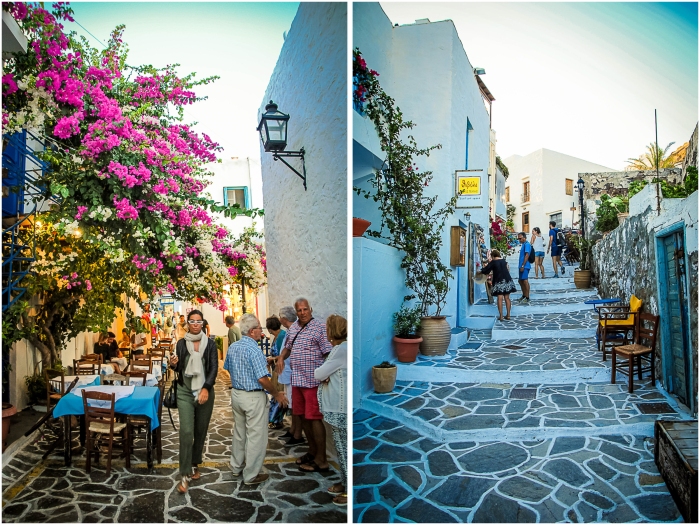 And the sunset wasn’t that bad as well. The best views are definitely from the Castle (Kastro) on the hill above the village. From there the village unfolds on one side and the descending sun on the other. 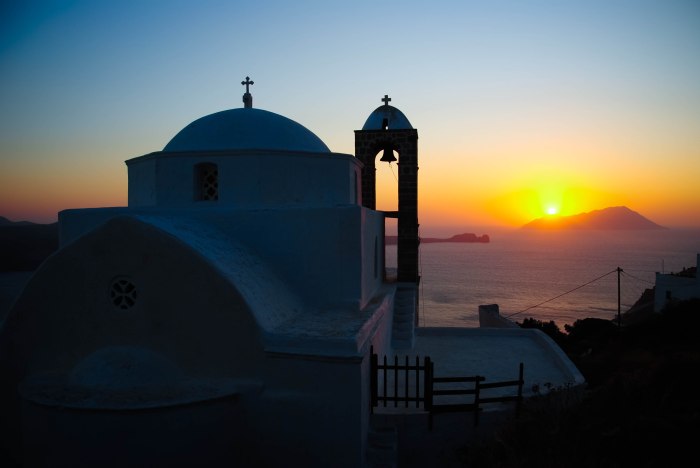 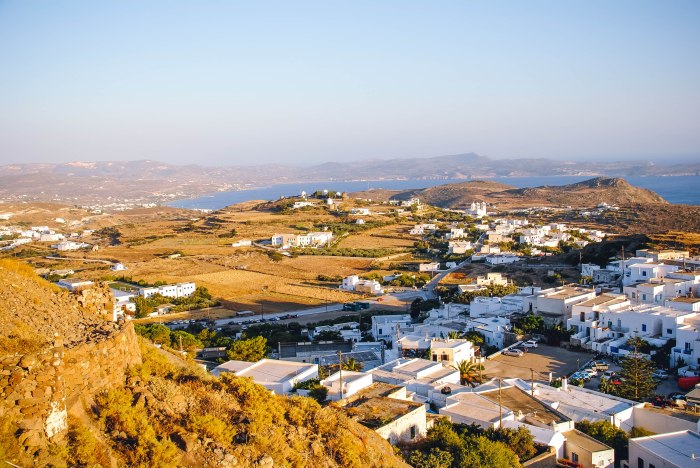 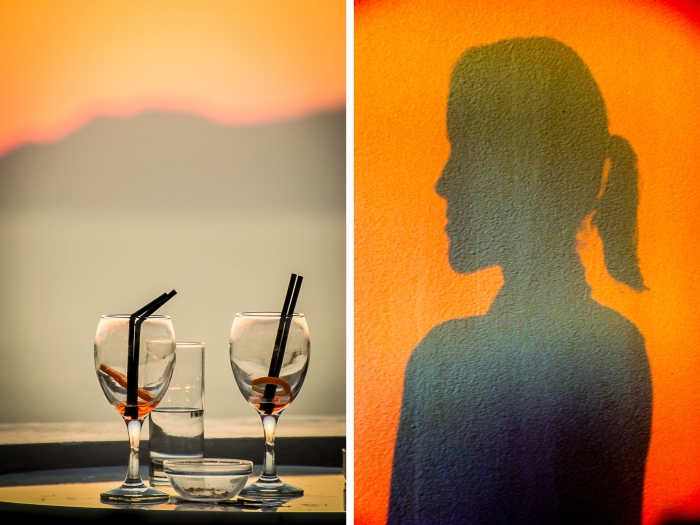 Having a rented motorbike allows you to reach all the small villages that the bus doesn’t take you to. First up was the traditional village Klima. It’s full of picturesque fisherman houses, situated just a few meters from the seashore. The first time that we visited the village, there were huge waves that made walking along the village impossible. So we came back another day when the sea calmed down. The ground floor with its brightly painted doors was meant as a garage for the boats, while people used to live above it, on the first floor. The houses are painted in different colors so that the fishermen could separate there own house from the others from afar when returning back from the sea. Nowadays many garages are rebuilt and renovated into apartments.

Next up was the Firopotamus fishing village. It’s another traditional village with boat houses, which is worth strolling around, even though there’s not much to do. 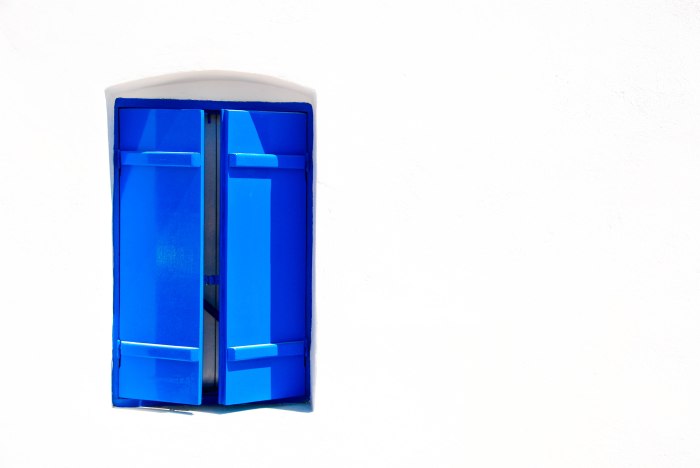 Enough with the villages already. Let’s go onto beaches!

As said the port of Adamas has a beach (Papikinos beach), but it isn’t one you’d want to lay your towel onto when other great beaches are just a short ride away. It’s situated just beside the main road and the faded grey sand stretches so long into the sea that you have to walk quite far to be able to actually swim.

Definitely the most famous beach on Milos is Sarakiniko. Although it sounds like a place somewhere in Japan, the two don’t have any relations. It’s situated on the north of the island and it’s accessible also by bus. It’s known for it’s powdery white rock formations that give the place moonlike environment. The rocks come in all shapes and sizes and their white color stands out besides the turquoise colored sea. It’s something we’ve never seen before. The landscape is the most photographed one in whole Aegean sea (source). There are also some abandoned catacombs, worth having a look. 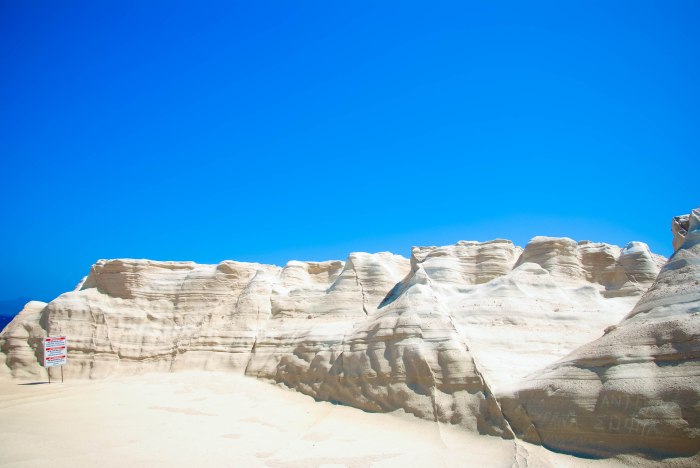 The only bad thing about it was that we visited it on a very windy day. The wind carried the sand in all directions as well as into our faces and our camera. After walking around the place with sand bleeping between our teeth we decided to skip the swimming and relaxing on the beach (even though we came prepared with a large, heavy bag with our towels, books and other beach stuff that we ended carrying around) and drove to another beach, sheltered from the wind.

Which brings us to Paleochori. Paleochori beach is located on the south side of the island and has a good bus connection from Adamas. It’s distinguished colored pebbles come in different hues of red and brown. It’s backdropped by enormous red and orange cliffs, which proudly show island’s volcanic origin. The beach is organized and we quickly helped ourselves to some sunbeds (5 EUR per two sunbeds and one umbrella). Nothing beats a day on the beautiful beach! 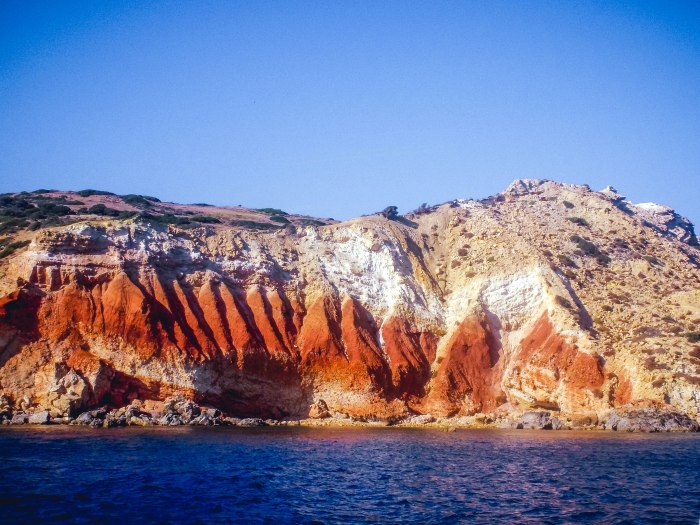 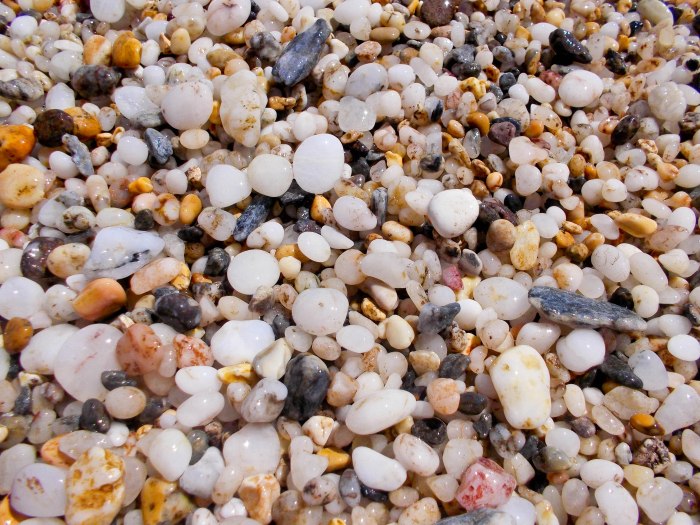 Milos doesn’t come short on beaches. Another one that we loved is Firiplaka beach. It’s an organized beach also located on the island’s south side. You have to park your wheels on the cliffs and then descent toward the beach. But before that don’t forget to take a few minutes to enjoy the great view from the cliffs. 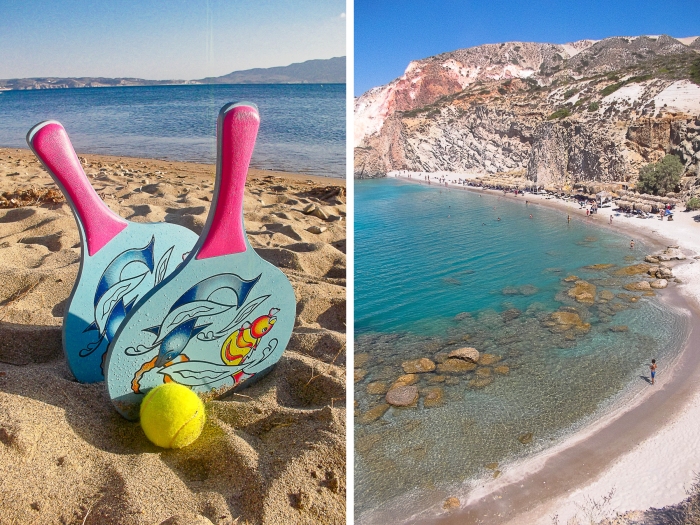 We were on Milos for 10 days, which is more than enough to explore the whole island and see everything. But if you come, it’s worth staying at least for 4 days to get at least a little into the island vibe and to have as well some time to enjoy the beaches.
But that’s not all there is to Milos. Next up is a bout tour around the island, which was the highlight of our time there.
Have you ever been to Cyclades? Do you know where Milos is?

14 thoughts on “Back to Greece: Milos”